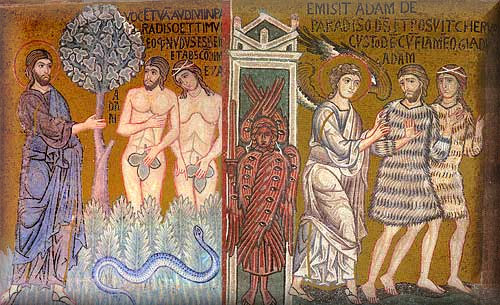 The Garden of Eden begins the quest for the promised land

The quest for the promised land has plagued man ever since his legendary expulsion from the Garden of Eden.

And the Lord God planted a garden eastward in Eden; and there he put the man whom he had formed. - Genesis 2:8

Therefore the Lord God expelled the man from the garden of Eden so he would work the ground from which he had been taken.  - Genesis 3:23

The dream of peace on earth

Man has devoted many hours to improving his world and in search of "promised lands" and "the good life" to regain his paradise.

The concept of the mystical promised land is present in eastern philosophies as well.

"Shambhala: The Sacred Path of the Warrior" is a book about the Shambhala Buddhist vision addressing personal and societal problems. The Shambhala teachings are founded on the premise that there is basic wisdom that can help to solve the world's problems. This wisdom does not belong to any one culture or religion, nor does it come only from the West of East. Rather, it is a tradition of human warriorship that has existed in many cultures at many times throughout history.

... it is not important to determine whether the kingdom of Shambhala is fact or fiction. Instead we should appreciate and emulate the ideal of an enlightened society that it represents. ..... Chogyam Trungpa

Shambhala is a mythical kingdom hidden somewhere in Inner Asia. Chogyam Trungpa was a Tibetan Buddhist teacher who spoke often on the Shambhala Vision.

The origin of Shangri-La

Many scholars believe that Shangri-La is Shambhala, a mythical kingdom in Tibetan Buddhist tradition, which was sought by Eastern and Western explorers. Victoria LePage's book, "Shambhala:The Fascinating Truth Behind the Myth of Shangri-La" makes the connection between the Buddist teachings and the modern fable.

The concept of a remote beautiful imaginary place of Shangri-La has become a part of American culture.

U.S. President Franklin D. Roosevelt named the Presidential hideaway in Maryland after Shangri-La. It has since been renamed Camp David. Roosevelt initially claimed the Doolittle Raid came from Shangri-La; this later inspired the name of the aircraft carrier USS Shangri-La.

Utopia: A place of ideal perfection

People who avidly pursue the ideals of the promised land are called visionaries or utopians. The dictionary, and society, are very negative when defining utopia. Literally utopia means "no where" or "no place." With an insight into life, and an understanding of utopian idealism, the definition can be changed to any place or anywhere. Utopian thought is often identified with idle dreaming, rather than creative thought for a better world.

My philosophic journey will explore the possibilities of utopian thought, rather than simply dismiss the ideas as idle craziness. After all, being a little bit crazy is what keeps me sane.

Let us take a look at the modern social definition of Utopia: The world of Sir Thomas More's created in 1516.

"This is my simple religion. There is no need for temples; no need for complicated philosophy. Our own brain, our own heart is our temple; the philosophy is kindness."    ... Dalai Lama