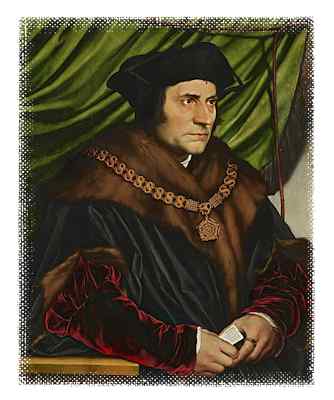 No journey to explore the quest for the promised land would be complete without a look at the world of Sir Thomas More's Utopia.

Sir Thomas More coined the word Utopia in 1516. Written as an act of the Humanist movement, More’s Utopia is the story of an imaginary island society. Utopia means nowhere in Greek. More’s story of Utopia is told by Raphael Hythloday. Hythloday in Greek means "talker of nonsense."

Utopia is an island of fifty-four cities, with the chief city in the center. All cities are twenty-four miles apart. The layout of all the cities as well as language, customs, and laws are all the same. The countryside is covered with well-managed farm land, with all citizens spending at least two years on a farm.

Besides agriculture, everyone has at least one occupational specialty. It is customary to follow the trade of your father, however you may be adopted into a house of a different trade. You are welcome to learn more than one trade, and practice the trade of your choice, unless the state deems your other trade to be in need.

A six hour work day assures there is enough work for everyone. Leisure is highly valued with time devoted to education and recreation. Working hard on literature in your leisure time can get you promoted to the class of scholars. Priests and government officials are chosen from the scholar class. Utopians consider the cultivation of the mind the greatest happiness of life.

On the economic side there is a marketplace where no money is exchanged. There is no private property, nothing is private. No locks are permitted on homes, all things are shared.

The sizes of the cities are regulated. People are moved between cities as needed to maintain equality.

The family unit is based on a system where the eldest capable father runs a large family group. Meals are served at large community dining halls where women do the cooking, with slaves doing the dirty work.

There is a high emphasis placed on health, with well managed hospitals a priority. A terminally ill patient is advised to resign from life. Voluntary death, approved by the priests and the senate is considered honorable. Unapproved suicide is disgraceful and not worthy of burial.

In choosing mates a supervised showing in the nude allows prospective mates to be assured of no hidden defects. A woman marries at around age 18, a man at 22 or older. Lust and adultery are severely punished.

Inhabitants of foreign cities who are condemned to death are permitted to live in utopia as a slave. Likewise, very poor persons from other countries may voluntarily serve as Utopian slaves. Utopians who commit crimes are individually reviewed for punishment in a case by case basis. Most serious crimes are punishable by slavery. The attempted crime is punishable as the crime itself. A novel concept, no lawyers are permitted. Utopians believe a lawyer simply mixes up a persons story, and a person cab best defend himself. Utopians are critical of laws, believing it is better to not write a law at all, than to write a law no one understands.

Utopians make no treaties, for the greatest bond is kindness. While they detest war, but will fight for their own defense. Utopians will also wage war on behalf of the oppressed. Any wealth received as a result of war is sold off. Wealth is scorned. Gold is used to make chains and restraints for slaves. However the wealth won in war is often used to buy mercenaries, and even as a tool in war. Wealth is used to breed discontent among enemies. Rewards are offered for the capture or killing of an enemy leader. In battle the leaders are targeted to end the war as quickly as possible.

Utopians are free to worship as they please, however, complete religious freedom is only extended to those who believe in a single superior divinity. Services are very ritual in huge dark buildings with candles and devotional prayer. Those who refuse to believe in an afterlife are not considered citizens.

More is given credit for the modern idea of the ideal society. While More’s book did set up a model for society, like most great classics, it was also an attempt to speak out against the government of his time.